A Short History of the Prayer of St. Michael the Archangel 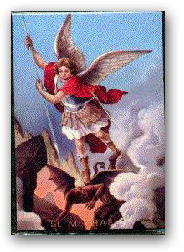 The Prayer of St. Michael the Archangel goes back to the late 19th Century. In 1884, Pope Leo XIII was finishing Mass and was walking away from the Tabernacle when he collapsed. Those that were at the Mass surrounded him and when a pulse could not be found, he was thought to be dead. The Pope then “came to”, having collapsed in a state of ecstasy. He then related what he had experienced.From in front of the Tabernacle, he had heard a confrontation between Jesus and Satan. Satan was bragging to Jesus that if he had enough time and enough power, he could destroy the Church. Jesus asked him “How much time and how much power?” Satan replied he would need a century and more influence over those that would give themselves to him. Jesus said, “So be it.” The 20th Century is the century that was given to him to test the world.The Pope was quite shaken having heard this and went immediately to write the Exorcism Prayer, of which the Prayer to St. Michael the Archangel is the short version. Pope Leo XIII also knew that the Rosary would be the weapon that would defeat Satan. He went on to write 13 Encyclicals on the Rosary.

Prayer to St. Michael the Archangel

St Michael the Archangel defend us in battle; be our protection against the wickedness and snares of the devil. May God rebuke him we humbly pray. And may thou, O prince of the heavenly hosts, by the power of God, thrust into hell Satan, and all the evil spirits who wander through the world seeking the ruin of souls. Amen.